Last month I read a news brief on Google’s projected numbers for 2011. It was no surprise the damn thing had a green arrow pointing north. With Larry Page at the helm of Planet GOOG (ticker), he has a major undertaking to GOOG shareholders. The idea of making money hasn’t changed. However, one could only question if the plan for making money has changed. Frankly, it’s been the same plan all along.

Google published its projected increase for CPC (cost per click) in 2011 as 5%, the same as last year. When I heard this, I choked on my Americano. There is no way Google’s CPC only increased 5% last year. They must have done one of those weighted means we forgot about in Stats class. Even after digging up a subjective number, we found an 8% increase in CPC that was published by Jefferies & Co.’s analyst, Youssef Squal.

Youssef may not be so quick to overstate but I will. It’s more than that. It’s hard for us to tell because we manage our clients CPC down. When you think about all the advertiser accounts that go unmanaged or that are managed by a majority standard, 8% is the difference between a CPC of $1.00 and $1.08. Come on! 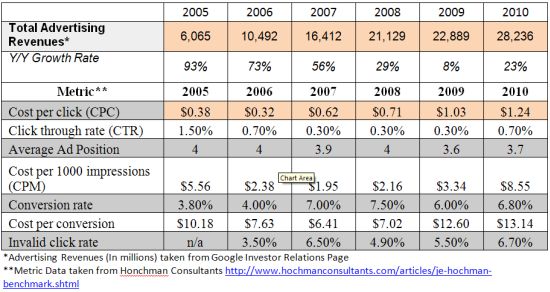 Above is a chart showing year over year differences in Google advertising revenues and advertiser performance metrics from 2005 to 2010. According to Hochman Consultants, Google’s average CPC rose from $1.03 to $1.24, a difference of 21 cents and a 20% increase in average cost per click. Since 2005, Google’s Average CPC has increased over 3.25 times the 38 cents it used to be.

The correlation between the average CPC and Google’s ad revenue isn’t exact year over year. However, they are positively correlated over the 5 year span as they have both increased more than triple its original benchmark. Most of Google’s revenue increase in the earlier half of the segment is largely attributed to increased advertiser involvement and consequently higher CPC. The latter half (of the 5 years) we believe not so much.

According to a WSJ Online piece that syndicated last December, the number of new Adwords advertisers has slowed over the past few years due to a global markets being tapped of new enrollments. It also suggests that Google’s push for local markets will fuel the search engine’s future needs for new advertisers but only a small fraction of local businesses are advertising online today.

From what we’ve seen of both national and local markets, hiked CPCs are posing a huge barrier to entry. Google’s updates Quality Score index has evolved into a highly CTR (click thru rate) weighted calculation incorporating not only real-time CTR but historical CTR as well. New advertisers have it hard to penetrate the marketplace. When a local or non-local business starts up a new Adwords account, there are typically inflated CPCs for some time until a weighted CTR can be calculated over time. This means new advertisers have to endure if they are going to succeed on Adwords.

Meanwhile, the same quality score issues and hiked CPC is causing havoc in advertiser accounts. It’s slower to notice in legacy accounts that have been active for years. They seem to grandfather in a lot of old time quality score and even CPCs from the past. But the upward trend is ever present when viewing a date range of average CPC data.

So what the heck is happening?

In a nutshell, there has been a huge pendulum swing from profit once being distributed to businesses but that is now directed to Google. Google feels if they make more of the lions’ share, they can be more profitable and businesses will think they are fighting their competition. Guess what? Google is right. Businesses will think that but they will really be losing hand over fist to Google.

Remember, if you are already in a competitive business, there is a huge likelihood the barrier to entry into your industry is a 1000 foot brick wall. There is no new competition. No one wants to bid up more than they have to. Ego has left the building and being number 1 in the sponsored links just isn’t worth sacrificing the Friday nights at Applebee’s.

What can you do about it?

There are lots of things Adwords managers can do about it. Here are 10 things to gain back profit from Google.