How Google Destroyed Its Results, Increased Your CTR, and Made $66B in One Year 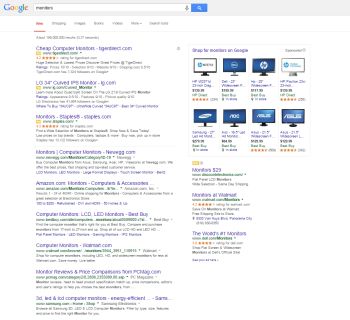 Yes Google did make $66B last year but it’s been botching up the SERPs for a little over a year (and much longer of you want to include Panda in that discussion). Just had to clarify for those that want to split hairs; everyone else gets the point.

A series of moves on Google’s behalf have completely changed the landscape of the search results page (SERPs) and, perhaps, in a good way for paid advertisers. Google has always maintained that it’s moves have been to “create a better user experience” for users. However, cleverly changing, and removing various non-paid features only leaves the assumption that there might be some background strategy to get more people clicking on paid ads (although its as obvious as a witch in a broom store.)

Here is a list of changes that have occurred in the last year or so that primarily deal with some sort of muddling organic or non-paid listings.

July 2nd – In Depth Articles (now ‘In The News’) doubles in SERPS but is lowered down the page.

July 24th – Penguin Update hurts the number of local pinned results. The shift took place limiting when local results are listed and how many. Mostly decreasing the number of map marker listings from 7 to only 3.

November 21st – Google Carousel got dropped for several search types like hotels, restaurants, nightlife, and entertainment. Carousel still shows for museums, landmarks, and movies. The hotels clearly have a booking feature in the new format which includes a CPC opportunity for Google. Although we don’t see the connection with restaurants and entertainment year, they are the next likely candidates for a paid program whereas museums and landmarks are not.

With the emergence and rise of Google Shopping as well as enhanced features in ad extensions within Adwords, there is no doubt Google is drawing your attention away from organic results. We’ve seen a steady progression of Shopping listings gaining more of the SERP real estate for over the past year.

On the non-paid side, we’ve seen a rapid decline in eye-catching features in the SERPs. Google has to manage the tradeoff between increasing profits and keeping user experience up. Still, they’ll be really trying to attain the sweet-spot for where they benefit but keep Google the preferred search engine.

Luckily, in this case for PPC advertisers, it creates an opportunity to take advantage of the additional CTR. Hopefully you don’t have to lose in organic to pay for a gain in sponsored listings.

[Update: In February of 2016, Google rolled out the removal of sidebar ads. This made it so only 6-7 sponsored ads will show on SERPs. For the official update visit the FULL POST HERE.]