The Effects of Google Sidebar Changes

We’re all dying to know the immediate effects of Google removing all the text ads from the sidebar. Since February, Google has rolled out a staggered removal of all sidebar texts ads, leaving only Google Shopping ads and the Knowledge Graph. And as of this past week, most of the rollout has completed so we have at least a little data that we can work with. We’ve taken a substantial portion of our clients reporting to put together some meaningful insights.

Before we dive into the findings, I’d like to provide a little breakdown of what exactly has changed. 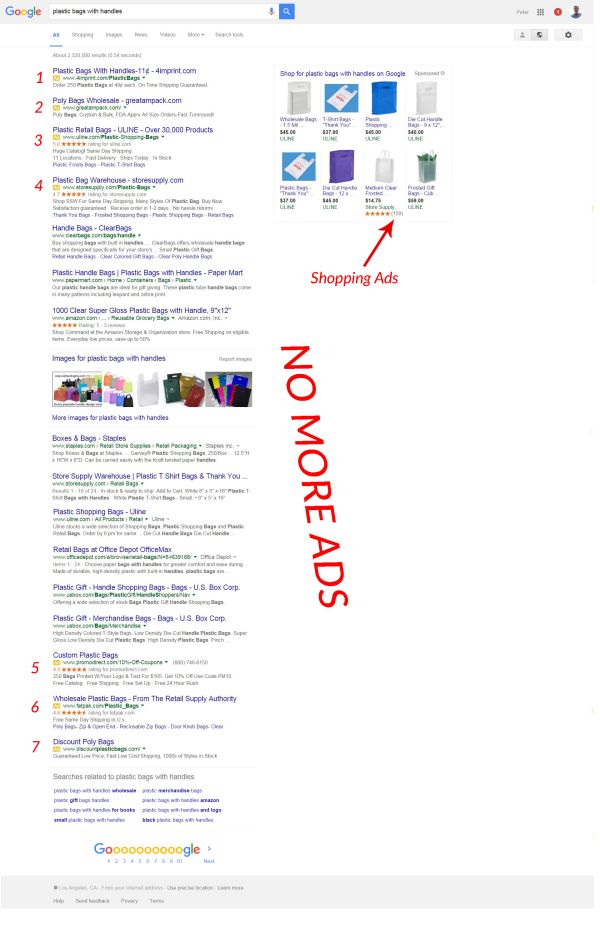 As you can see (to the right) we have moved from a time where there were sidebars text ads to only text ads at the top and bottom. The Search Engine Results Pages (SERPs) which once held ten to eleven first page spots are now maxing out at seven ads. It will be important to note: that in competitive search auctions, the #4 ranked ads moved from the right sidebar to under the first three ads in the top-left while the #5 ranked ads move down to the bottom of the page (also on left). In less competitive auctions, the #4 ad moves down to the bottom with a few others showing only five to six ads total.

Prior to doing the analysis, we weren’t sure how the change was going to affect our advertisers. There were some seemingly obvious predictions, such as:

A. When the #4 ad moved over to the left, the CTR would improve. In the old setup when Shopping ads were present, the #4 ad was pushed down the sidebar, making it less visible. Today in less competitive auctions, the #4 ad moves down to the bottom of the page. This offsets the increase in CTR. Overall, we expected a slight to moderate increase in CTR for the #4 (range) ads.

B. When the #5 ad (which was also previously moved further down in the sidebar) moved down to the bottom of the page, we expected the CTR to substantially decrease.

C. Although we didn’t know how much we’d see, we did expect an increase in CPC across all ad positions. Our logic was that where there were simply more positions before. Now advertisers are now lobbying for six to seven positions, which would be the big money factor for Google.

D. We predicted that the ads positioned in #5 or lower (on the page) would lose their total click volume.

What we actually found out was quite interesting…

The sample was taken from our agency MCC which consists of about (70% ecommerce, 25% lead gen, and 5% other) We took the data from the last 7 days of January (25-31) and compared it to the past 7 days (Feb 29-Mar 6.) From these ranges, we used an ad position range to average out to the ad rank (i.e. position 2.5 – 3.4 range accounts for the average position #3). We used position ranges rather than exact position reporting because of a hyper-fluctuation from position to position. Rather than displaying exact total clicks and total cost, we’ve opted to display % of total clicks and % of total cost. The total number of impressions between the two periods only dropped by 3.5% while the total number of click increased by 7%.

The results so far are dramatic, and yet it is still very early. Most advertisers have not gotten the feedback from their reporting or taken any action to manage Position vs CPC vs. Cost. 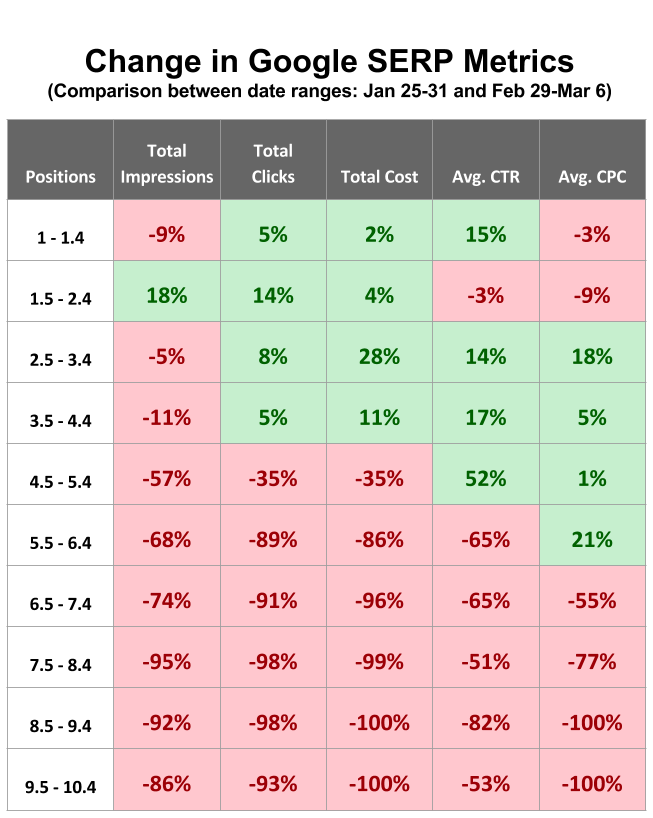 The Main Effect (and Shockers) of the Sidebar Removal

The migration of impressions and clicks coupled with moderately decent CPC increases is a recipe for trouble with many advertisers. Survival will be for those who have either maintained top positioning over time and can sustain that cost or those who have sought refuge in Google Shopping. Those in lower top positions might feel a squeeze or crowdedness while advertisers seek more impressions and clicks near the top. Many will be forced to bid up and see if they can hold on to that level of spending. Once everything settles out in the next year, there will be fewer advertisers standing. And those who can keep going will secure their business by heightening the barrier to entry in Google SERPs.