The Googfather Takes IRCE by Storm 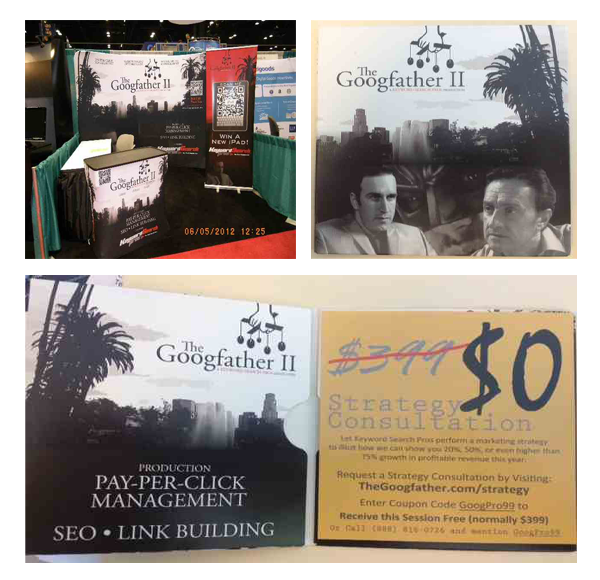 Last week, four Keyword Search Pros touched down in Chicago headed for the IRCE (Internet Retail Conference & Exhibition) with the mission of showing attendees how dangerous this Googfather guy really is. Although there was not much boot trembling going on, there was extended talk about Google’s new black and white furry friends.

Last week, we released The Googfather II, a short film starring actual KSP employees that portrays Google to be mafia-like in their overwhelming control over Adwords advertisers. In this sequel, the advertiser’s character was more Adwords confident and savvy than Joe Shop Owner from the first movie, but in both films, it takes a Keyword Search Pro to save the advertiser from certain demise.

We loved the movie so much, we decided to make “it” our tradeshow booth theme in Chicago; not knowing the reception it would have. We spared no expense and even created DVD packets which were used as giveaways at our booth. Inside the DVD wallet were coupons giving away our $399 evaluation for free and of course the DVD which was loaded up with rich media including an Inside Look video interview of the KSP team who helped make the movie.

When it came down to exhibiting The Googfather, it was nothing but thumbs up. Everyone knows the Godfather and has some kind of soft spot for Michael Corleone. I’ve never met anyone who said, “Oh the Godfather, what a terrible film.” It’s a classic!

The show was a hit! Many people took glances and just laughed while other said, “Dude, The Googfather… that’s awesome!” We were told over and over that our branding was impeccable and would be remembered long after the show! And having walked the showroom floor myself, I can state there were fierce competitors and an overwhelming collage of other types of businesses present. It was enough to make your head spin. And so would they also be remembered weeks after the show? Some yes…others perhaps not. But we stood out like a cry for help; for excitement and diversity from the norm. We made fun in what countless others made dreary and monotonous. And so The Googfather made great segue for Keyword Search Pros into the world of tradeshow exhibition!

I suppose that’s great and all, but did we really drive home our point? I mean we made an entire six-minute movie about how Google is evil and how it is an Adwords profit cutting, advertiser controlling, search engine killer and that KSP is there to save everyone. We are so passionate about pay per click that we wanted everyone to know they could take back control of their Adwords accounts. But did anyone say, “Hey I was thinking that same thing. I’ve been trying to take back control of our Adwords account for a few years now and I’ve had enough damn it!”????

Sadly not… but we weren’t about to follow everyone home to make sure they’d watch the movie. Instead The Googfather did open tons of PPC conversations and led to some hot topics right now in SEO, specifically Penguin and Panda updates which we were thrilled to talk about.
I’m sure that many of these attendees will forget the details of our conversations because they spoke to so many vendors. I’m sure when I call them next week, they’ll say, “You know Pete; I spoke to like five of you guys. Which one are you?” And I’m sure when I remind them I was the devastatingly handsome gentlemen in booth #433, they’ll have no idea what the hell I’m talking about, but one thing is for certain… when I say I was the guy they met at The Googfather booth, they’ll say, “Oh yeah! You guys are awesome! How the hell are ya?!?!”

WATCH THE VIDEO OF KSP’s 2012 IRCE iPAD DRAWING AND OF WINNER, SERGIO MENDOZA ACCEPTING HIS PRIZE.